Chemical Fire at the National Guard! If You're in Houston, Stay Inside! 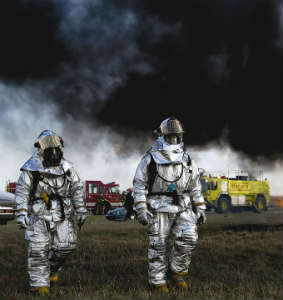 HOUSTON, TX – After a chemical fire with the National Guard, Houston locals and residences were advised to stay inside their homes. But, how did this happen? Elevated levels of benzene were hanging in the air because of a fire. This fire caught at a Houston-area petrochemical storage facility.

Located within Deer Park, the Guard sectioned off the Intercontinental Terminals Company. It is 15 miles southeast of Houston and can still affect local residences.

The Texas Environmental Protection Agency (EPA) claimed that the benzene levels didn’t pose any health concerns. Although, there was a mandatory “shelter-in-place” order on Thursday. The report by the agency stated that there were active levels of benzene as well as other active organic compounds. Some school districts shut down schools for the day due to unpleasant air quality.

The fire started Sunday but the effects are still noticeable. The fire spread to storage tanks holding hazardous materials. This includes gasoline, nail polish remover, glue, and paint thinner. Some locals experienced symptoms from the unfavorable air conditions. These symptoms include headaches, nausea and nose bleeds. Long exposure to these harmful, highly-flammable chemicals cause blood and bone marrow issues.

But, what about the environment?

The EPA conducted many tests throughout the Houston and Deer Park areas. Even though they did claim that the air condition is safe, some don’t have confidence in the agency’s tests. But, this isn’t the only concern for locals. Many residences are concerned about how the fire impacted the environment. If foam and chemicals are used to stop the fire, they might leak into the Houston Ship Channel. In turn, this would lead to the Gulf of Mexico.

The Texas Commission on Environmental Quality and the EPA are currently waiting for water sample results to test the impact of foam on the environment. Only time will tell what the results will be in Houston.

For Porsche enthusiasts, navigating the current Porsche 911 lineup can be a ... Read More

Men who kidnapped two women forcing them to take out cash from an ATM are b ...Read More